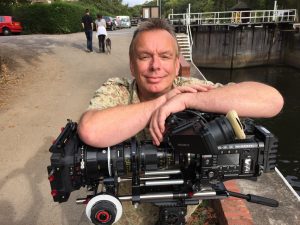 I provide directing writing and production for a number of clients including production companies, as well as marketing and advertising agencies.

I have worked with presenters, and actors and have filmed in Europe and the Far East. I am competent, and professional working on corporate video and television commercials.  I also write and frequently do my own off line editing using AVID.

I am creative, well motivated and like working under pressure.  Used to long hours as well as extended stays away from my base, a good motivator of others, both crews and talent, I have worked with a number of celebrities including Steve Rider, Sue Barker and Tessa Sanderson.  I am flexible, able to think on my feet, good at problem solving and have excellent communications skills.

Previous video and or broadcast experience

Responsible for marketing the company, achieving new business, and then producing and directing video programmes, conferences and multi media productions.

I managed both the production and facilities side of the company, which included a large TV studio, two non linear avid suites, a linear suite as well as a graphics facility, which had both 2D and £D designers.

I taught all aspects of video production to Btech Photography students.

I was involved in all aspects of corporate video production from client liaison, scriptwriting, planning and filming through to editing the finished programme.

Engineered/operated sound and lighting systems for a number of live bands. This included working with the resident band at a holiday camp on the Isle of Wight, in 1988.

I have a full driving licence.  I am a keen DIY enthusiast and my hobbies include camping, county walks, visiting National Trust sites, Formula 1 motor racing, reading and watching science fiction. I build and operate radio controlled model boats and submarines. I enjoy live music and the theatre.

Thunderbrands – A conference video used to introduce products and product managers based on the Thunderbirds theme, for the Crookes products Annual Conference.

All of this for all of you – A series of six videos for Nottinghamshire County Council showing the range of services they provide for the community.

Care Management – A video for Newark Social Services Department, showing how they provide care for people with learning difficulties, aimed at clients and their families.

Silver Flame and the Showroom of the Year – Conference for a British Gas local service competition and showroom staff competition. We provided videos and equipment and ran the live show.

Atlas a World of Labels – Company promotional video used to show prospective customers what Atlas Labels and how the systems they use can benefit clients.

Access – A programme showing how members of the deaf community can easily access the services provided by Nottinghamshire County Council.  The programme features sign language and subtitled interpretation.

HSA Tessa Gymnasium – I wrote, directed, and produced a 60 second TV commercial shown on both satellite and terrestrial stations.  Presented by Tessa Sanderson, it requests viewers to call in for information.  To date it has been the HSA’s most successful TV commercial.

HSA Induction Video – A short programme using ‘Lean on me’ by Bill Whithers.  It features vox pops from actors selling the benefits of HSA membership.

A load off your mind – I wrote, directed and produced this programme, which forms the introduction to a training scheme for lorry drivers who transport hazardous loads.  Using an on screen presenter, interviews with drivers and a mnemonic to help drivers remember the most important facts.

Pieces – An educational video written by a group of young people.  I directed and produced what I feel is one of the best things I have ever done.

A job for life – wrote the dialogue directed the shoot and conducted interviews. This was a mix of drama showing a family moving into the area, the husband worked at a local quarry. He began training a new lad; unfortunately on a very busy shift he cut corners with tragic consequences. We created a scene where the actor fell into a rock crusher, very messy! The rest of the programme was interviews with witness of fatal or near fatal accidents.

NHS Choices – Directed shooting a drama both in a studio set up and live during a conference. Filmed the conference itself with 3 isolated cameras.

And many many more…